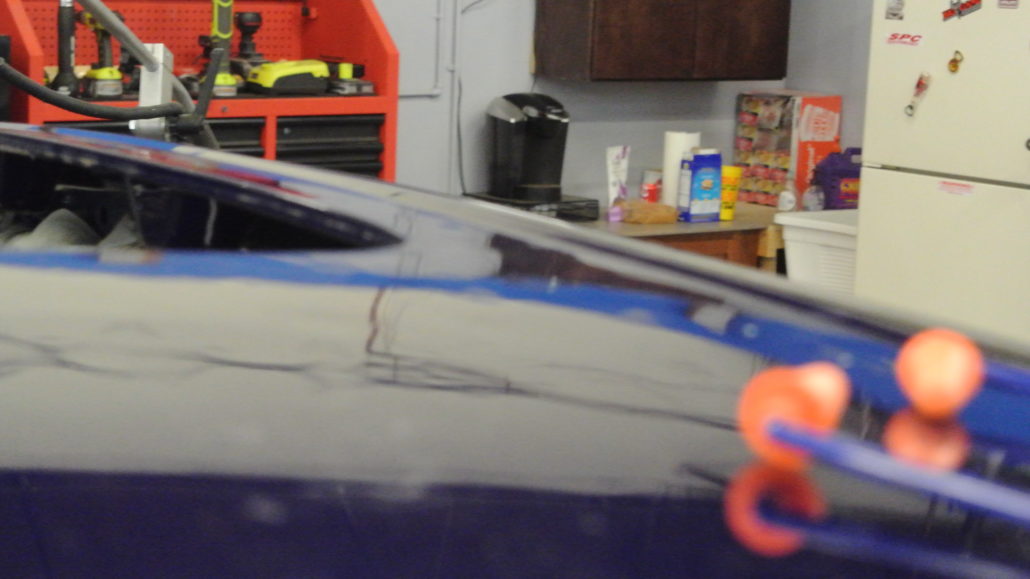 In this article I hope to shed some light on the art of paintless dent repair. If you are thinking of doing this to repair your own hail damage on a vehicle that is not worth fixing with an insurance claim or simply is not worth the damage that’s on it, this should help you get an idea of what kind of commitment you are undergoing when attempting to repair your own hail damage.

The main thing is to get to the back of the panel so that you can remove the dents from the underside. There is also glue pulling that uses hot glue to pull the damage out. Whatever method you use it is advised that you actually practice on a dummy hood or panel to avoid breaking your paint because no one wants paint flaking with rust spots all over. 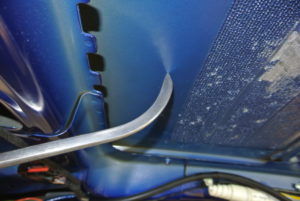 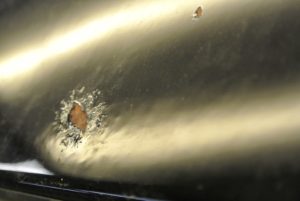 The damage you see on the picture above was caused by really bad PDR.  The rust started just months after the repair was done and there was paint flaking all over this car.  If you break your paint it’s done fore!  Just after a couple of months the spots will get worse and the paint will start to flake off and then it will begin to rust really bad causing even more damage to the paint.

This video above was made about 25 years ago but you can learn a lot from it.  The tools and techniques have evolved quite a bit, but the concept is still the same since it’s inception.

Dent training costs a ton of money but if you have a good drive you can learn it on your own.  You will have to spend countless hours pushing on metal so that you can have a realization of the techniques and concepts.  If you decide that you like it and want to take your training further then I advise attending some workshops and seminars.  Most places will charge you about 20,000 for training but you can learn a lot of the concepts on your own and then attend some far less expensive advanced workshops that will teach you things that are very difficult to learn on your own.

How To PDR Videos:

There is only so much that you can learn by watching videos.  You must actually do the work in order for the muscle memory to kick in.  Practice, practice, practice. You must be diligent as it take about 10,000 hours of practice to reach the level of mastery.  If you have the patience and the time, then you should pick it up no matter what.  It’s very frustrating at first but once you start to get some successes then you will start to gain some momentum and you should be repairing your hail damage soon.

Like previously stated before you should not start on your actual vehicle no matter how shitty it is.  You don’t want to break paint and then have a bigger problem on your hands then the dents you were trying to fix.

Doing the dirty work is by far the best method to learn paintless dent repair.  Start by drawing some dots on the panel you are learning on and try to find your tool.  Push the center of your dots over and over and over.  Once  you have found your tool on the underside of the metal and were able to push the center of that dot you created over and over with no problem then you can move on to working on a very small dent.  You shouldn’t start on a big dent because you do not know how the metal works yet.  Once you learn how to push a tiny dent then you can progress to a slightly bigger dent.

Learning the concept of how the metal works is very important but unfortunately every metal is different so these software approaches will fall short of teaching you anything.  They teach you the basic concept but that is about it.  You cannot learn how the metal moves because every make, model, year and panel’s metal will behave differently so you will not be able to learn much on this approach.

PDR school can cost a heap of money and it only lasts about 10 days.  Most of these training schools focus on quantity instead of quality.  You will be in the class with 30 other people and will get very little one on one.  The biggest issue with these classes is that they will be very redundant and really just require you to teach yourself anyway.  You will do far better getting a few months under your belt and then going to one of these schools and asking question after question and demanding one on one time with your instructor.

As you can see it is not as easy as people think to do PDR on their own but it can be done.  You can learn it, in about 2-3 months and then you will be able to give your own vehicle a try.  If you do happen to break the paint, be sure to seal it with some clear coat or something to avoid the damage from getting worse.  Using clear coat should buy you some time but it wont fix the issue at all.  Once the paint is broken the structure of the factory finish has been compromised and will eventually need to be repainted.

One last note:  Many old school pdr technicians will steer you in the wrong direction because they don’t want any more techs rising out of the limelight.  They will perpetuate lies like stupid tricks;  these tricks include but are not limited to:

All these are lies and you should not fall for them.  There are no tricks to PDR and it’s simply hard old fashioned work that will get a dent out and not some trick.  It takes time, patience, and diligence to learn how to do paintless dent repair and there is absolutely no tricks that will make you a PDR tech in no time.  It takes much time and effort to lean the way the metal moves and when something is not possible with PDR.

Steering Is a Hail Insurance Trick To Save Big Money

0 Comments on "How To Do Paintless Dent Repair"