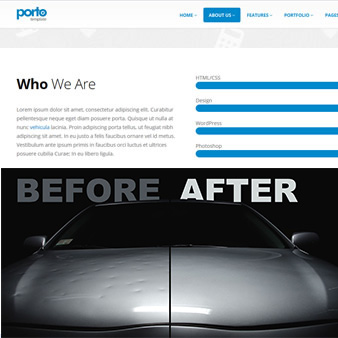 Fixing your own hail can be a daunting task and will require much practice before you get any good at it.  There is no tricks or gimmicks used to repair hail damage on a hood other than good old fashioned hard work.  In this article I hope to teach you the simple methods of PDR and you can determine if it’s even worth giving it a try on your own or not.  If you have an older car that you plan on driving to the ground or it’s an older car that has very little value then I would recommend giving paintless dent repair a try but only if you don’t really care about how the outcome looks.

What Tools Are Used?
The tools used for paintless dent repair are pretty pricey and require many hours of practice just to know how to use each one.

What are the PDR basics?
The basic idea is to get to the back of the dent and slightly but firmly push on the center of the dent over and over until the dent starts to release.  As you can see from the picture it’s easy on some parts of the hood but really difficult in others.  You use rods to push on the dents but when there is no access the technicians will use a technique called glue pulling.  Glue pulling (video found here) is an advanced technique that uses a glue gun and glue tabs to pull the dent point by point when the dent is not accessible form the back. 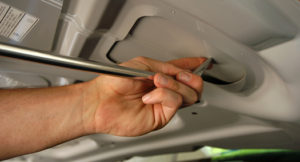 How to practice PDR?

The idea of practicing is to find the point of your tool from the underside of the metal.  Put a seires of dots on your practice hood and try to push the perfect center of the dot.  Once you practice this for about 2 weeks you should be able to know where your tool is on the underside of the metal and you can begin trying to push on a dent.
Learning the right amount of pressure is key when starting to push on some dents on your own.  Push on the dent while gradually increasing the pressure until you can see your tool tip poke up but not leave a permanent mound.  Continue to massage the dent point by point until it starts to move.  You will have to move your tip to the new lowest part of the dent as the lowest part of the dent moves.

Here is a time lapse of a car being repaired by paintless dent repair:

In this article we shall also try to answer all these questions:

Many local body shops will have some hoods they are planing on throwing away and you can simply go and ask for one or you can possibly buy one for how much they would get for the scrap metal.  $5-$15 for the hood should be enough to cover their scrap metal profit. 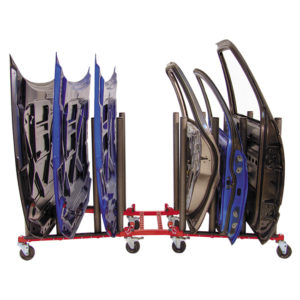 What are the possible risks associated with trying PDR myself?

The major risk of trying to remove the hail dents from your hood on your own would be cracking the paint or worse, breaking the metal on your hood.  That is why it’s very advised that you practice on some dummy hoods before you actually start on your own hood.

It is much harder to repair hail damage than one might think.  I wish there was tricks or gimmicks on how to do this PDR thing but the reality is that nothing is that simple in life.  If it was that simple then there would be a PDR tent on every corner.  The fact of the mater is that PDR is an art and just like art it can take a lifetime to learn.  However I’m not saying that if you practice for a while that you cant improve the look of your hood by trying it yourself, all I’m saying is that it’s not going to be that easy.

We can help you with your hood and you can pick and choose what dents you would like us to remove so that you don’t have to pay much.  The best starting point ( I think) would be to give us a call and set up a time for you to come over and look at the process and maybe how you can get some pointers on repairing your damage.  Some damage that might not seem that bad is actually impossible to fix so before you waste your valuable time, it might pay off to have a professional look at the damage you are trying to repair.

Remember:  There are no tricks to fix hail damage.  Among these fake ways are: dry ice, blow dryer, air duster, plunger, and many more.  Don’t believe any of these because it simply will not work for removing multiple dents.  You might get lucky and remove a dent or two at the risk of your paint and finish but it will never be practical enough to remove multiple dents on one single panel.  We have seen them all and none of them work on a regular basis and there is by far more risk involved with these fake ways than the possibility of success.

0 Comments on "How To Fix Hail Damage On A Hood"